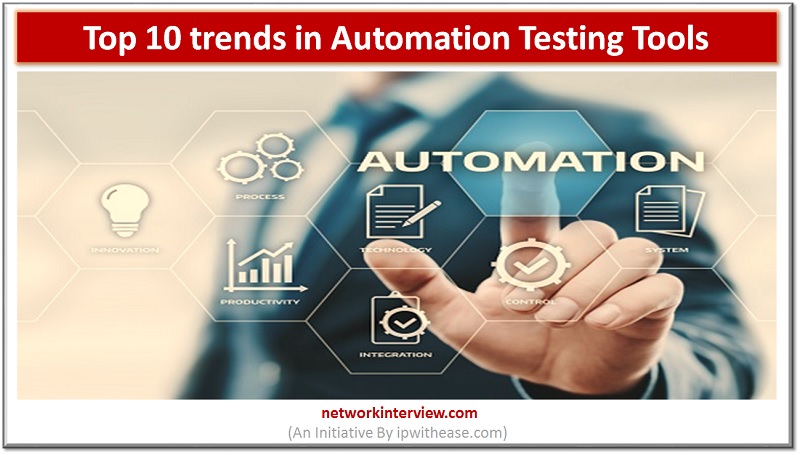 Automation testing tools are evolving rapidly as the digitization is growing and organizations needs applications which are easily deployable, agile in nature, can address business requirements in a quick manner, solutions can be developed and tested in a more faster and smarter way with less human intervention to make testing more efficient, smarter, and more effective and build a more robust product while keeping quality in mind.

In this article we will look at some automation testing tools which made their place in top 10 in 2021.  Continuous integration (CI) and Continuous development (CD) is the need of the hour and focus is shifted from shortening testing times to effective usage and better coverage of testing tools.

Here is the list of top 10 automation testing tools which are trusted to address the automation challenges. Tools selection is based on Support for APIs and services testing, AI/ML capabilities, Maturity, and popularity. 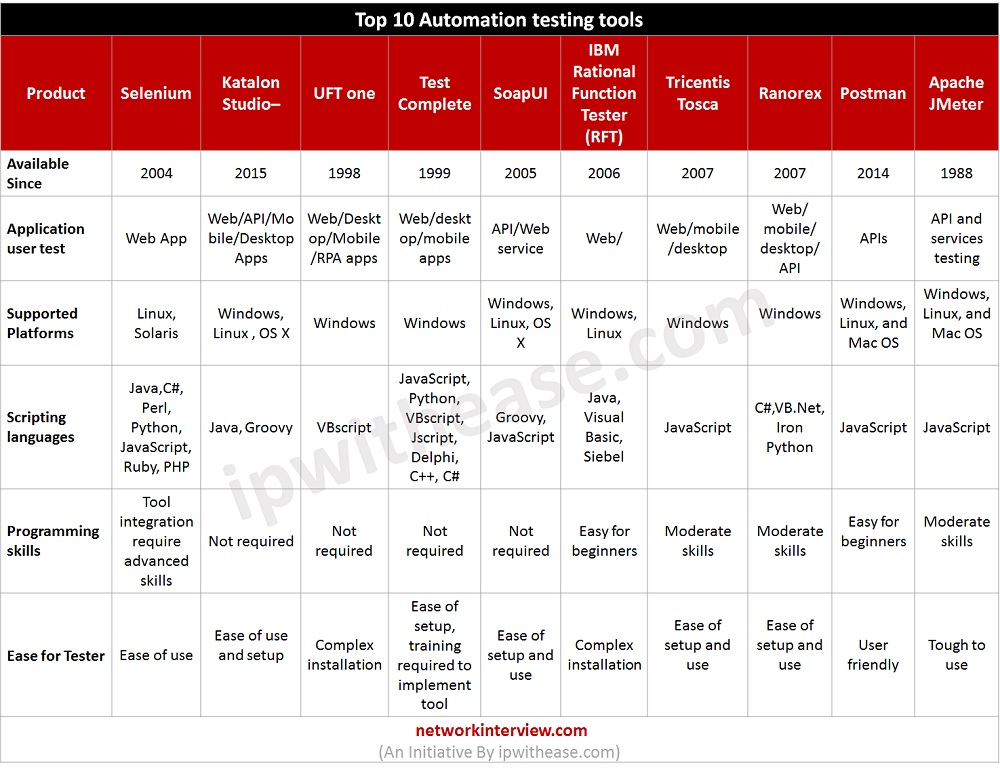 It is considered a benchmark to use Selenium for user interface testing of web applications. Users can create / write scripts in different languages (such as Java, Python, C#, PHP, Ruby and Perl) which can run on multiple platforms such as Windows, MAC and Linux and supported browsers are Chrome, Firefox, Internet explorer and Headless browsers). The first alpha version of Selenium was released in 2019. To use this product advanced programming skills are required.

It is a very comprehensive and powerful tool for testing API, Web, mobile, and desktop application testing. It has multitude of features and supports multiple platforms such as Windows, MacOS and Linux. Katalon Studio provides a unique integrated environment for testers to integrate and deploy different framework and libraries to use Selenium and Appium. It has a comprehensive set of automation of API/Web services, and mobile applications.

It has hundreds of built in keywords for creation of test cases, supports BDD Cucumber to express tests cases in natural languages, meant to be used both for manual and exploratory testing, test capabilities can be extended via plugins on Katalon Store.

Its version 14.4 released in April 2020 includes integration with Jira and cross platform testing permit users to record and create manual web tests for supported browsers. Self-healing function leverages the AI based algorithms.  It has playback feature like Katalon studio. Checkpoints can be inserted into test steps for verification of results.

It is a tool of choice for testing API and services. It is especially designed for API testing. SoapUI supports REST and SOAP services. API testers can use open source or pro version. Pro edition has user friendly interface and many advanced features such as assertion wizard, form editor and SQL query builder.

It is a test automation tool meant for testing applications which are developed using different languages and technologies exploratory requests such as Web, .Net, Java, Visual Basic, Siebel, SAP, PowerBuilder, Adobe Flex, and Dojo Toolkit. It is a data driven test platform for regression and function testing.

Some of the features of RFT are visual editing via screenshots to have a storyboard format to represent test actions which allow users to address user interface changes and reduction in maintenance overheads, Advanced ScriptAssure technology, early data detection, choose between Java or Visual Basic .NET, Storyboard testing which helps to edit and visualize tests using application screenshots and natural language. It can integrate with other IBM applications lifecycle management tools such as IBM Rational Team Concert and Rational quality manager.

It is a continuous testing platform which provides comprehensive toolset to support all testing activities from test design to test automation. This tool has many features such as dashboards, analytics, integration, and distributed executions to support continuous integration and DevOps practises. It has a user-friendly interface and has feature set for designing, implementing, executing, managing, and optimizing API tests.

It can be easily integrated with DevOps processes, API tests across browsers, mobile devices and platforms is supported, supports multiple standards and protocols  – HTTP(s), JMS, AMQP, Rabbit MQ, TIBCO EMS, SOAP, REST and IBM MQ , it has good set of reporting and analytical capabilities. It supports API security configuration in API connection manager and allow users to use signature security option to sign in into multiple parts of messages.

It is being around for quite some time and provides a comprehensive set of features for web, mobile, desktop, and API testing. It leverages experience of desktop-based test automation, UI element identification, editing, and management. It has user friendly GUI interface, record/playback, and script generation. It can be integrated with Selenium grid to enable distributed testing with parallel test executions. Version 9.3 has enhanced Jira and TestRail reporting.

It is another automation tool designed for API testing. Users can use this tool as a browser extension or a desktop application on Windows, Linux, and Mac OS platforms. It is popular among developers equally who use this tool to develop and test APIs. It has comprehensive feature set for designing, debugging, and testing, documenting, publishing APIs, it has user friendly interface, and supports both automated and exploratory testing, it accepts Swagger and RAML API formats.

It is an open source tool for testing test load and performance. The tool is used for API and services testing, it is lightweight and easy to use user interface, test results can be replayed, supports .csv files to set API parameters values, supports integration with CI tools such as Jenkins. Version 5.2 released in November 2019 supports JMESPath extractor, JDBC improvements, StringtoFile, HTTP Samplers.