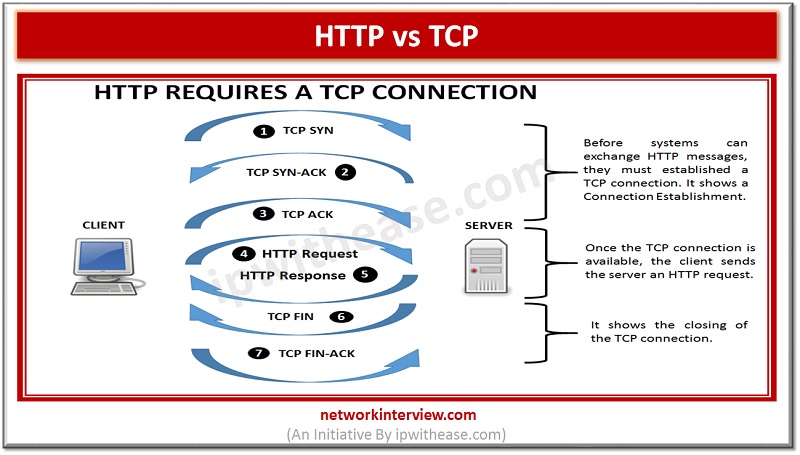 Before discussing the difference, let’s understand the two terms first

HTTP is a Hypertext Transfer Protocol. HTTP works similar to other application services like SMTP and FTP. Like the performance of FTP, it transfers a document using service of TCP port. But it uses just one TCP connection i.e. at data link and no individual Control Connection is used.

HTTP is a protocol which fetches resources such as HTML documents. It is used for exchanging data on the Web and is a client-server protocol which means requests are initiated by the recipient usually the Web browser.

The controls from the client-side delivered in a request message into the webserver. The web server sends the requested content at a response message. The HTTP doesn’t provide any security and makes use of SSL (Secure Socket layer) to club security in its communication.

How does HTTP works

TCP is a connection-oriented protocol which states a connection is established and maintained until the application data at each end have finished exchange. TCP breaks application data into packets. This packet delivers to the transport layer. Layer 4 manages flow control and provide error free data transmission and handles retransmission of dropped or garbled packets and acknowledges all packets that arrive. In the OSI model, TCP covers parts of Layer 4 the transport layer and Layer 5 covers the session layer.

TCP’s job is to ensure that all data sent in a stream moves from client to server in a correct order and is intact. TCP uses a technique known as positive acknowledgement with retransmission, requiring the receiving end of a transmission to give a response as to what data has been received. The bytes sent can exactly match the bytes received. No data is altered or lost along the way.

Comparison of TCP and HTTP

TCP stands in Transport Layer of OSI Model and is responsible for connection oriented communication between client and server. HTTP is an Application Layer protocol that is a request/response between client and server. TCP provides communication services between a sender and receiver. Client sends a request and the server sends a reply ACK back to the client after 3-way handshake they start data transmission. HTTP transfer web contetnt that user requested.