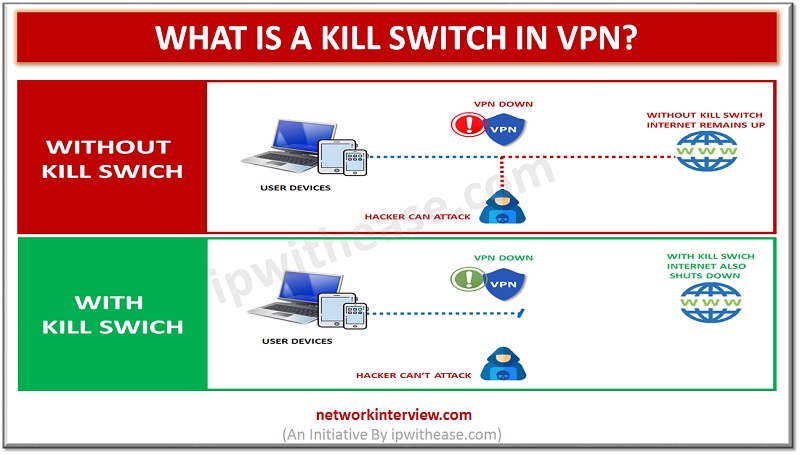 A VPN kill switch is also known as an internet kill switch. For the VPN security solution, a VPN kill switch is a critical piece. It is considered to be the top feature for the best torrent VPN. This feature ensures you that your real IP address would not be exposed online if there is a drop in VPN connection.

The VPN kill switch is quite important for those who use the BitTorrent and are the users of torrent downloaders. This is because no one would prefer to expose there IP address and location to the torrent swarm. The reason for looking at the VPN feature is preferably anonymity as it would prevent you from vulnerable when the connection is dropped.

The highlight of the top VPN providers is the kill switch which is written into the software. The VPN kill switch feature can be controlled by you, with the thinking that the kill switch can be enabled or disabled as needed.

When this feature is enabled, it will ensure that your IP address would not expose accidentally when there is a connection drop with the VPN server and instantly switch off the internet connection.

You will be automatically get connected to the internet through your normal connection when this feature is not enabled. After that, it will expose your true device location and IP address to all the protocols and websites which you are accessing at that time.

Related – Is It Legal To Use A VPN?

A Passive Kill Switch Protocol can sound tame, but actually they are more secure. The application of the VPN does not wait for the information which is to be received from the VPN server. Despite that, it automatically stops sending the traffic to prevent the device from the moment when it stops receiving a signal from the server.

An Active Kill Switch Protocol is designed is such a way that it tells the user that you are disconnected from the VPN service. It also prevents your device from connecting to unsafe networks and also sends that information to your device.

How does the VPN Kill-Switch Work?

It has the ability to react virtually as well as instantly. They disconnect the internet connection from your computer as soon as they receive the internet outside of your secured tunnel of VPN.

If my VPN switch built-in is switched off, then how would I able to know?

To figure out which VPN software is offering this feature is quite a tricky task. The more confusing thing is that each VPN provider comprises of their own name for their Kill Switch Technology.

This information can be fetched with the help of the VPNs FAQ and by reading the features, but most the VPNs advertise the Kill Switch technology much more heavily than others.

Whenever we talk about security or private internet access, the very important feature of VPN services is VPN Kill Switch.

The VPN Kill Switch is one of amongst the three most important points that a consumer should look at while taking the subscription of the VPN service. A Kill Switch is also known by the name internet kill switch which is responsible for switching the internet connection from your device which is being compromised by the spy and the hacker. It also ensures that your internet access and true or “actual IP address” should never be exposed online whenever your VPN services hail or fall.

Difference between LDAP and AD