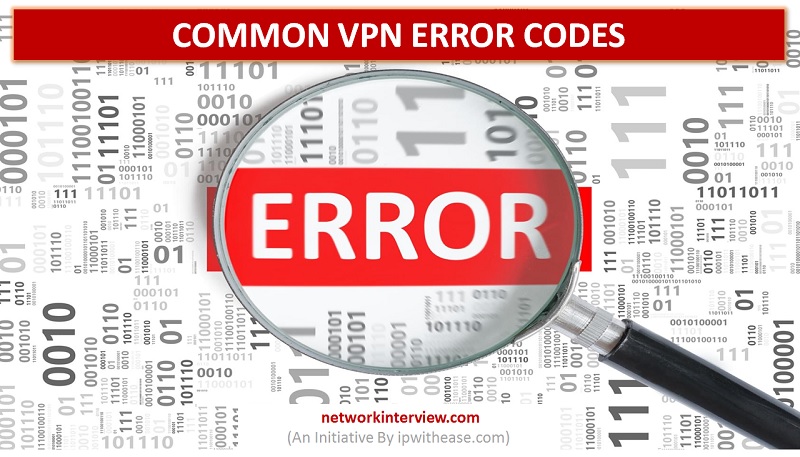 VPN (Virtual private Network) has become an essential part of network and security suite when it comes to secured communication over Internet. VPN forms secured tunnels between a local client and a remote server. Remote and mobile workers use VPN almost daily as part of day 2 day activity.

VPN connections also face challenges  due to underlying issues which are hard to troubleshoot. To make troubleshooting simpler and easy to diagnose the fault, the client program reports an error message relevant to reason for the problem. In this post, we will discuss some of VPN error codes that many users face –

This type of VPN error is reported by VPN client -“Unable to communicate with the VPN subsystem” . This error is received when the local service is not running or the client is not connected to a network. Restarting the VPN is the general troubleshooting step taken an resolves the issue most of times.

This type of error is reported when either due to network failure or firewall blocking ports, the error message received is – The remote peer is no longer responding.

This error depicts that connection was terminated by the remote computer before it could be completed. This error often occurs when the underlying connection is facing errors or intermittent disconnection. The issues may be one of following – firewall or network problems/conflicts.

The cause of this error may be one of these 2 – 1st being that user name and password combination provided is not recognized, or 2nd being that selected authentication protocol is not permitted on the remote access server.

This is error is generally received while using the PPTP or L2TP protocol. The error message received is – “No PPP control protocols configured“. On a Windows VPN, this error occurs when the client lacks sufficient protocol support to communicate with the server. Recognizing which VPN protocols the server can support and setting up a matching one on the client via Windows Control Panel.

This error is faced while trying to establish a VPN connection to a corporate LAN network by using a PPTP client. The error message received is -“The remote computer did not respond“.

This is a very common error. The error message received is – “The PPP Link Control Protocol Was Terminated” . The reason for this error may be due to wrong settings within the connection properties. Deleting the connection and recreating is likely to resolve the issue.

Post installing and configuring the VPN client, following error may occur when dialing the connection – “A certificate could not be found that can be used with this Extensible Authentication Protocol.” .Wrong security settings within the PPTP or L2TP connection may be the reason for this error. Reinstalling the client, installing the certificate on end device or using our Dialer are some of ways to troubleshoot this problem.

“A connection between your computer and the VPN server has been established but the VPN connection cannot be completed.” – This error indicates a router firewall is preventing some VPN protocol traffic between client and server. Most of the times, at least one intermediate device between customer computer and the VPN server is not configured to allow GRE protocol packets. TCP port 1723 is the most common issue and must be opened by the appropriate network administrator.

This type of error is mostly related to VPN server than device. The error message is –“The network connection between your computer and the VPN server was interrupted. This can be caused by a problem in the VPN transmission and is commonly the result of internet latency or simply that your VPN server has reached capacity. Please try to reconnect to the VPN server. If this problem persists, contact the VPN administrator and analyse quality of network connectivity” – Server overloading can be a probable cause or maybe due to poor network connection. Another cause may be due to Firewall on customer computer and disabling the firewall temporarily may resolve the problem.

This error is generally experienced when a firewall between the client and server blocks the ports that a VPN tunnel uses. The error message received is – “The network connection between your computer and the VPN server could not be established because the remote server is not responding. This could be because one of the network devices (e.g., firewalls, NAT, routers, etc.) between your computer and the remote server is not configured to allow VPN connections. Please contact your Administrator or your service provider to determine which device may be causing the problem.”. Another way to resolve the issue may be to  change one-time registry if the VPN server and/or client is behind NAT. You must reboot your computer when done. It is good practice to backup the registry first.

The error message related to these errors are – “The connection was prevented because of a policy configured on your RAS/VPN server” – On Windows VPNs, the user attempting to authenticate a connection may have insufficient access rights. This issue may be resolved by updating the user’s permissions.