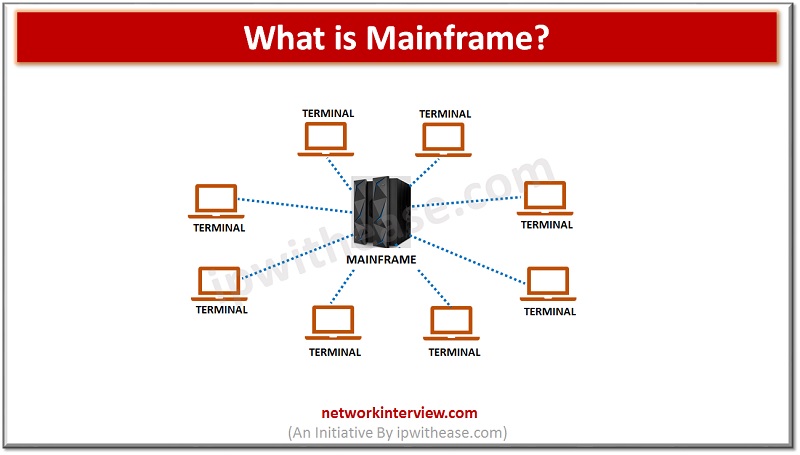 In the late ’90s and early 2000s, it was predicted that the computer era would come to end. But to our surprise, the technology has developed further and taken various forms. One of them is the mainframe computer, shortly called the Mainframe.

If you are working in a large organization you should come across this name frequently. Are you wondering what this Mainframe is? Why it is very important? In this article, you will get to know everything about it.

A mainframe is a large computer with huge software and hardware resources to handle large data processing. They are mostly used in large companies or organizations that process 1 trillion web transactions (both monetary and others) daily.

It is a high-performance computer with large memory space or size, and processors that can handle billions of data transactions. They are more reliable, agile, and secure than other types of advanced computers.

History of Mainframe and other Supercomputers:

Mainframe computers are used by various companies in the world, mostly by those who are involved in the following fields – Consumer statistics analyzing, census calculation, enterprise resource planning, and large-scale processing. These fields require large data and transactions handling on a real-time basis.

Difference between Mainframe and other Supercomputers

The mainframes are used as DATA servers, whereas supercomputers are the ones used to predict the weather, solve complex mathematical problems, and for research purposes only.

How does Mainframe Works?

The mainframe looks like a cabinet or rack, which contains multiple processors or large processors and memory. Modern Mainframe can run on more than one Operating System (OS).

They can work as separate virtual machines though they are physically in one place. The resources in the Mainframe are separated into different virtual systems to process the data. This increases the security as even one system gets affected it doesn’t hinder others.

At the same time, data can be stored in one place and can be shared if needed. Mainframes are mostly used as servers to manage large users or data.

A single mainframe can be separated into various servers to handle separate data processes. But even thousands of small servers joined together they cannot handle the amount of data handled by a single mainframe with the same reliability and security.

In this way, Mainframe helps the companies a lot.

Characteristics of the Mainframe Computers:

Advantages of Mainframe to business:

For a small or individuals Mainframe may not be of large use, but if it is a trillion user or customer organization then Mainframe computers are must needed thing for them. The mainframe has also created many employment opportunities for the technical experts like –

Feel free to ask your questions relating to Mainframe in the comment section.

What is Pylint? Python Programming