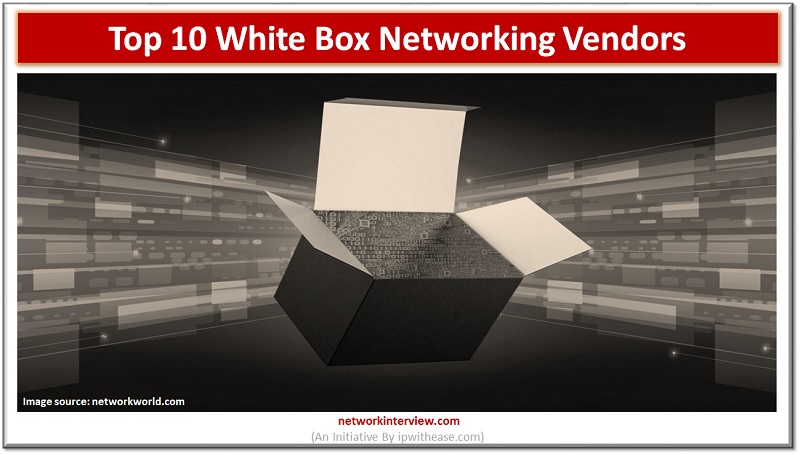 SDN technology detaches dependency on binding both hardware and software. Starting with the SDN network 10 years back, a number of start-ups started to develop open networking systems and white box switches for data centres.

In this article we will look at some white box networking vendors which made their place in the top 10 and changed the networking landscape drastically. Understand their strengths and features.

Big switch networks was founded in 2010. It was known for its Floodlight SDN controller which got open sourced in 2012. Big cloud fabric is a major product from big switches. It offers Virtual private cloud (VPC) based logical networking, delivering automation of networks and visibility to both on premises and multiple cloud workloads. It provides consistent network management and capabilities for operations management. Some of the key customers of big switch networks are Verizon, VMware, Visa and T-Mobile.

Plexxi was founded in 2010. Key product is Plexxi switch which enables customers to build public and private clouds. This product post acquisition is getting integrated with HPE composable Fabric ecosystem. Plexxi supports composable infrastructure which can be composed or recomposed as per the need based on network loads. Some of its customers are Arrow electronics, SafeGuard Scientifics and Jefferies Financial group

Pluribus was found in 2010. Its key product offering is Netvisor ONE Operating system which is layer 2/3 switching optimized for meeting requirements for distributed enterprise and service provider networks. It supports peer-to-peer architecture, and eliminates the need for an SDN controller and simplification of overall network architecture. It supports open compute platform (OCP) and open network install environment (ONINE) standards. Some of its key customers are Cloudflare, Steelcase and Tibco.

It was founded in 2012. Its key product is NoviWare network operating system software which can be deployed on network switches, WAN IP/MPLS routers, network appliances, and high bandwidth forwarding planes. It is compliant to OpenFlow 1.3/1.4 and 1.5 protocol versions. Its key customers are Fortinet and Lumina networks.

Kaloom is a software solution for white boxes which are meant for hyper scale and distributed data centres. It supports integrated routing and switching and enables developers to develop new code to add new features and services. It has low latency multi datacenter fabric, self-forming and self-discovery capabilities, zero touch provisioning of virtual networks and automated software upgrades.

Snaproute was found in 2015. It created an open-source software FlexSwitch to the open compute project (OCP). It runs on industry standard white box switches, provides all management and networking functionality to simplify networking stack. It automate network provisioning

What is White box Switching?

What is White box Switching?

What is SDP (Software Defined Perimeter)?