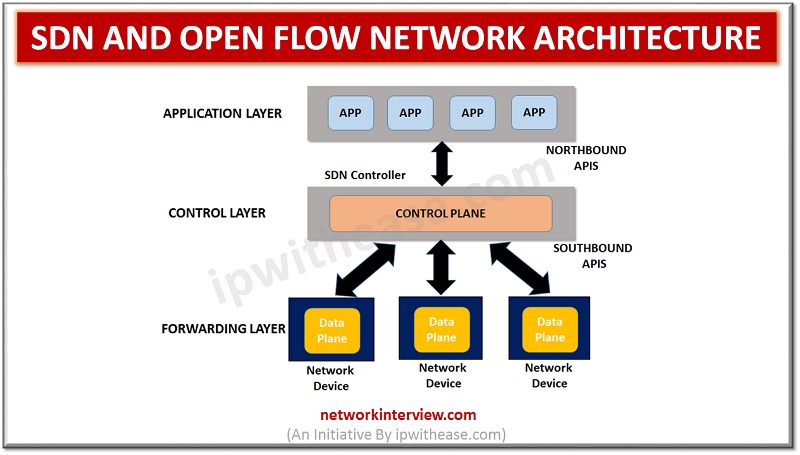 With colossal growth in Cloud computing and Intent based networking, SDN technology has clearly lead the race. Infact SDN has also catered to needs of overgrowing demand on IT for faster response to requests combined with more control over network. The first SDN communication protocol was Open Flow which was responsible for direct interaction between SDN Controller and forwarding plane of network devices like switches and routers etc. In this article, we will understand the concept of SDN and Open Flow Architecture –

SDN Controller: SDN Controller is the Center of the SDN Architecture and the most important SDN Architecture Component. It is the brain of system and central control mechanism of SDN network that controls forwarding plane. The control of all the data plane devices is performed via SDN Controller. It controls Applications at Application Layer. It communicates and controls upper and lower layers with API (Application Programmable Interface). It allows SDN users to gain a centralized control in the entire network and network administrators instruct switches and routers how the forwarding plane should direct network traffic.

Forwarding Plane: This layer of SDN that is full of physical or virtual forwarding devices.

Control Plane: This layer of SDN includes Network Operating System and SDN Controller. The control plane sets up the packet processing rules and establishment of the whole network switching policy.

Data plane: The data plane forwards packets via the router. Decisions are taken by controller instead of on each individual router.

Application Plane: This is top layer in SDN architecture.

Southbound Interface: It lies between the controller and the data plane forwarding devices. Southbound APIs push information to network device. Open Flow is the first southbound API and is a heavily adapted protocol.

Northbound Interface: It lies between the controller and the application plane. Northbound APIs push information above to the applications and business logic, giving network administrators the ability to pragmatically shape traffic and launch services.

Network Devices: Data Plane consists of various Network devices, both physical and Virtual. Data plane is responsible for forwarding of traffic. In the previous traditional networks, both control and data plane was in the same device. In SDN, network device only have the data plane. Incorporation of SDN setup offers a very efficient Forwarding mechanism.

Software defined does not mean that it only uses virtual switches instead of dedicated hardware switches to be programmed. The key feature of SDN is that the control plane is decoupled from the data plane.