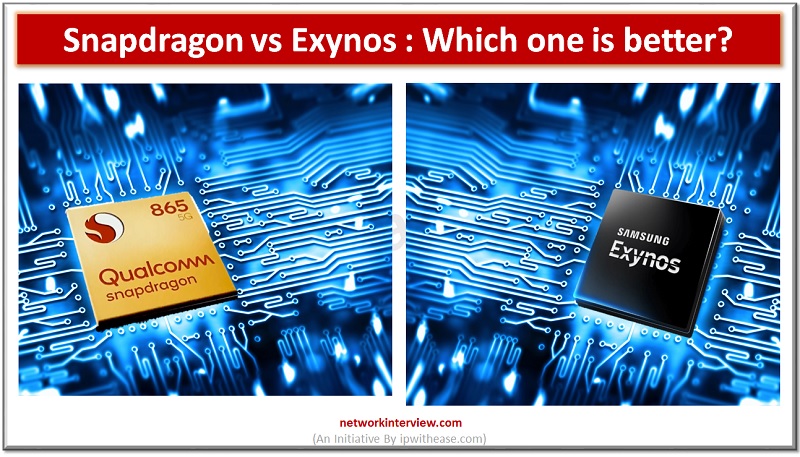 Have you ever bought a Samsung Phone which has a different processor than your friends? Yes, the Samsung Mobiles uses two processors for all their models.

The mobiles with Exynos processors are sold in Asian and European countries whereas the phones with snapdragon are sold in the US. Do you wonder why?

Here in this article, you will know about it and the major differences between the Samsung Exynos processor and Qualcomm Snapdragon Processor. Okay without further adieu let’s start the article with a short introduction to both the products.

Snapdragon is the SoC (System On a Chip) produced by the American-based multinational corporation Qualcomm technologies Inc. They are one of the top manufacturers of Semi-conducting chips used in Wireless Technologies, Consumer electronics like Cars, Mobiles, and other Gadgets, and also in the Telecommunication industry.

The Snapdragon is considered the best chipset in the market for Mobile or Smartphones and almost became a monopoly. The chipset uses the ARM Architecture and has an integrated GPU named Adreno which is also produced by Qualcomm Technologies Inc.

Features of the Snapdragon processor

Here are the salient features of the Snapdragon processor-

Exynos, which was formerly known as Hummingbird is an ARM architecture-based processor (SOC) designed by the Semiconductor producing subsidy of Samsung Electronics. It is mostly based on the ARM Cortex core with some exemption to High-End features of the Samsung M Series.

Unlike the snapdragon processor, the Exynos chipsets are only used in the Samsung self-produced mobile phones. They also have an integrated GPU named Mali. Samsung is the biggest mobile phone manufacturer in the globe and because of it, the Exynos Processor covers nearly a large part of the Asian and European countries.

Snapdragon vs Exynos Debate and its history:

This debate and comparison between these two processors started ever since Samsung started to release two versions of the same product with different processors. Yes Samsung itself uses a Snapdragon instead of its house-made Exynos processor.

There are various reasons for this decision some of them are –

Okay, Which is better?

Here is a side-by-side comparison between the two processors for you to make a decision.

Comparison between Snapdragon and Exynos Processor:

Are you still confused? It’s simple. The fact that Samsung itself is going for the snapdragon processor makes the Snapdragon winner. However, in past years, Exynos has been improving its processor performance. By the results, we may expect Exynos to take over the Snapdragon in the future.

If you have any other further doubts or questions about the Processor of the mobile phones. Please leave them in the comment section below. And let us know your thoughts on this article.

Snapdragon vs Kirin: Which one is better?

Snapdragon vs MediaTek: Which one is better?