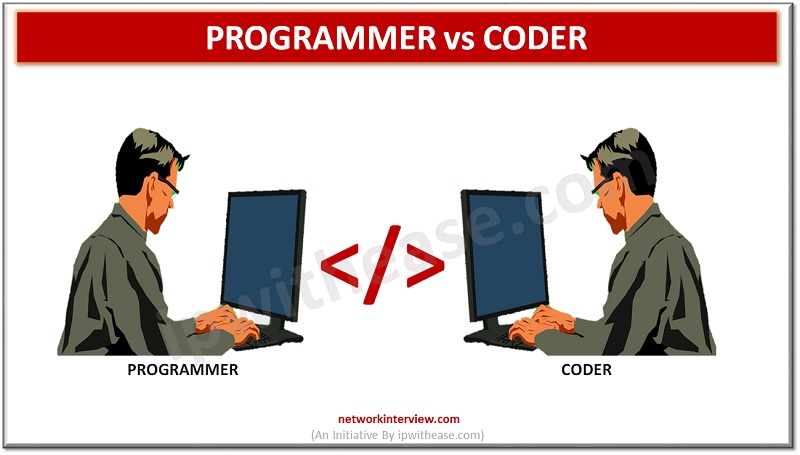 Introduction to Programmer vs Coder

Today’s IT field has expanded to different streams and introduced various technical terms. But there is still confusion among the Recruiters and other Tech people about certain terminology. One of them is the programmer and coder.

Though they are used synonymously in various cases, they are different. Are you also the one wondering what the difference between a programmer and a coder is? Then you are in the right place.

Here in this article, you will get to know the meaning, characteristics, and differences between a programmer and a coder. Okay without ado, let’s start the article: programmer vs coder

Who is a Coder?

In general, the coder is considered to be a person who writes the code. Coders are the least trained or beginners in the engineering or programming industry. To get a clear understanding you should first know what is coding–

Coding is just a translation of a natural language into a machine language through an intermediary computer language. It is a process of writing codes from one language to another. There is no pre-preparation work or trial error in coding.

A coder will be less experienced and will know only one or two code or programming languages. Often Junior programmers, Interns are considered to be coders. They are just asked to write the codes that are pre-designed or which don’t need any algorithmic knowledge.

But truth to be told, you won’t be seeing coder job recruitment nowadays. In the past coders were involved in converting the unique styles or logic into computer language (C or C++), but now it has become a thing that every student can do. So the term coder has now only been in use only between the non-tech-savvy peoples.

Who is a Programmer?

The programmers are more experienced than a coder, they have wide knowledge about different coding or computer languages. They apply algorithmic knowledge to create functional software. Let’s see what is programming –

Programming is the process of commanding or instructing the computer on how to perform a particular task. Through programming, you can control the various activities of your computer. You can write a program in different languages.

Programming involves various processes like planning, designing, testing, deploying and maintaining, etc… Programming is a part of Software Engineering itself.

A Programmer will be experienced in different languages and will create a program to execute a particular task. Thus programming involves coding as well as structures, algorithms, and more complex concepts. Sometimes the Programmer is recruited in different titles like Software Developer, Junior Engineer, etc…

By now, you should have got a basic idea about the programmer and the coder. Let’s see the major difference between them in the table below –

In short, Coding is a subset of Programming. A coder is just a translator or writer, whereas a programmer is someone who writes rules and conditions.

If you have any more confusion or questions regarding any other technical terms please leave them in the comment section below.

Software Engineer vs Computer Engineer: Which is the best career path?