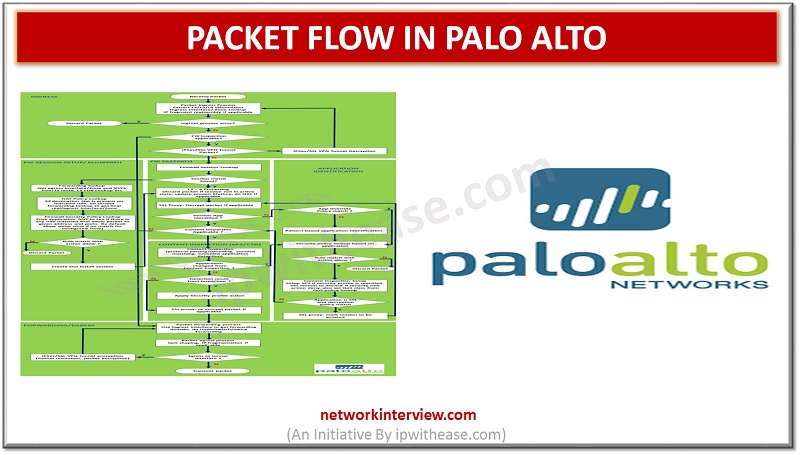 In this article, we will discuss on Packet handling process inside of PAN-OS of Palo Alto firewall.

Packet passes through the multiple stages such as ingress and forwarding/egress stages that make packet forwarding decisions on a per-packet basis. Following are the stages of packet flow starting from receiving the packet to being transmitted out an interface –

This stage receives packet, parses the packets and passes for further inspection. Firewall continues with a session lookup and other security modules. After that firewall forwards the packet to the egress stage.

Packet inspection starts with the parameter of Layer-2 header on ingress port like 802.1q tag and destination MAC address are used as key to lookup the ingress logical interface. Packet will be discarded if interface not found.

The Layer-4 (TCP/UDP) header is parsed.

Firewall performs decapsulation/decryption at the parsing stage. Firewall decapsulates the packet first and checks for errors and if error is found, packet will be discarded.

Firewall parses IP fragments, reassembles using the defragmentation process and then feeds the packet back to the ingress with the IP header.  Firewall discards the packet if packet is effected with tear-drop attack, fragmentation errors, buffered fragments (max packet threshold).

Firewall inspects the packet and performs the lookup on packet. Firewall session includes two unidirectional flows, where each flow is uniquely identified. In PAN-OS, the firewall finds the flow using a 6-tuple terms:

Firewall firstly checks the SYN bit set in packet received, if it is not found, then packet will be discarded.  If the SYN Flood protection action is set to Random Early Drop (RED) and this is default configuration, firewall simply drops the packet. SYN Cookies is preferred way when more traffic to pass through.

Packet forwarding of packet depends on the configuration of the interface. Below are interface modes which decides action: –

NAT is applicable only in Layer-3 or Virtual Wire mode. The ingress/egress zone information evaluates NAT rules for the original packet.

Session fast path checks the packet from layer 2 to layer 4 and passes under below conditions: –

When packet is inspected and matches an existing session, it will be subject to further processing when the packet has TCP/UDP data (payload), or it is a non-TCP/UDP packet.  Firewall checks for session application, if not found, it performs an App-ID lookup. If the App-ID lookup is non-conclusive, the content inspection module performs the known protocol decoder to check the application. If the firewall detects the application, the session is forwarded to content inspection if any of the following applied:

If the user information was not found for the source IP address extracted from the packet and the packet forwarded toward destination, firewall performs a captive portal rule lookup and forwards for captive portal authentication.

Packet is inspected by Palo Alto Firewall at various stages from ingress to egress and performs the defined action as per policy / security checks and encryption. Packet passes from Layer 2 checks and discards if error is found in 802.1q tag and MAC address lookup. Packet is forwarded for TCP/UDP check and discarded if anomaly in packet. Next is defragmentation/decapsulation and NAT, followed by zone check. Later on, User-ID lookup and DoS attack protection and other security checks in zone are executed as per configured rule.