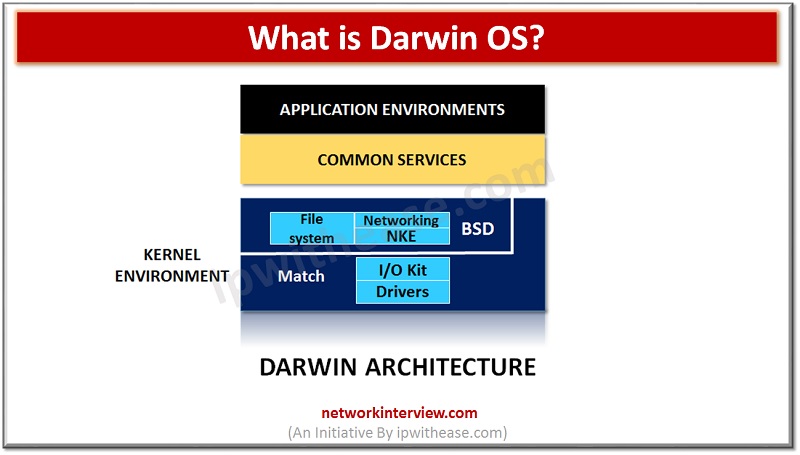 Operating systems are key components of computer systems and responsible for management of computer hardware, software resources and provide common services for computer programs and enable interface for end users to load and execute programs. Operating systems several flavours emerged from time to time and the growing complexity of hardware and application programs eventually made operating systems a necessity for everyday usage.

In this article we will learn more about Darwin OS, its features, advantages, and limitations.

The OS X kernel is an open source project. The kernel along with core parts of OS X are together referred to as Darwin. Darwin is a complete operating system based on many technologies however Darwin does not include Apple proprietary graphics or application layers such as Quartz, Concoa, Carbon or OpenGL.  Darwin has a BSD command line application environment.

Darwin is from Apple and the operating system for Mac OS X. Darwin is a Mac OS X without user interface. Darwin is compatible with FreeBSD distribution and emerged having efficiency and stability of UNIX with simple usability of Mac OS. Developers of Apple and the open source community worked together for PowerPC and x86 operating system versions, modifications, and developments flow back to the public, after a free registration of source code was made available for download from Apple website. Standard format supported for applications in Darwin is Mach-O and Linux applications can be ported.

Darwin technology is based on BSD Mach 3.0 from Apple technologies. It is an open source technology having developers’ full access to source code. Same software forms the core of both OS X and Darwin, developers can create a low-level software which runs on both OS’s. Majorly the technology is derived from FreeBSD, a version of 4.4BSD which offers advanced features like networking, performance, security, and compatibility features. Most part of the OS is platform dependent and it provides a clean set of abstractions for dealing with memory management, interprocess communication (IPC), and other low-level operating system functions.

What is a Terminal Server?