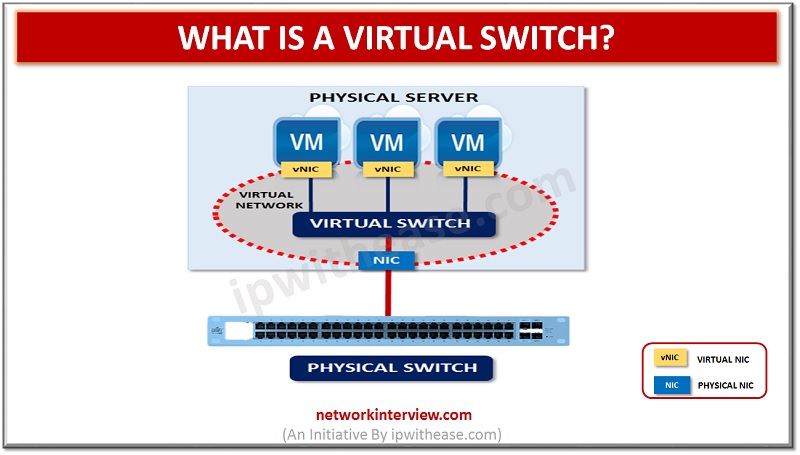 The logical entity termed as virtual switch is the fabric of logical switching by which the switch is followed as device of layer-2 network. Functions similar to the regular network switch are ensured by virtual switch with certain functionalities of advanced level which not present in physical switch. Some of these are:

Network loop cannot be created by Virtual switch for connection to the redundant network.

The vSwitches of VMware are divided into two categories:

1) Standard virtual switch is the one whose configuration is possible on single host ESXi. There are 120 ports in this vSwitch by default and per ESXI host, highest number of ports is 4096. Features of standard vSwitch are:

2) Distributed vSwitch (dvSwitch) is the one including features of standard vSwitch while giving an interface for centralized administration. Configuration of dvSwitches is only possible in server of vCenter. The settings of dvSwitch are same after configuration within datacenter on all definite ESXi hosts. This helps in facilitating large virtual infrastructures management that prevents the requirement of manually setting the standard vSwitches on each of the ESXi host.
The virtual switch ports and network states are kept by VMs after migration among ESXi hosts while a dvSwitch is used by them. On each dvSwitch, the maximum possible ports amount is 60,000. ESXI host’s physical network adapters are used by dvSwitch on which reside the virtual machines for establishing their link with external network. Proxy switches are created by VMware dvSwitch on every ESXi host for similar settings representation.

Following are the advantages offered by virtual switches:

Difference between TOGAF and ITIL