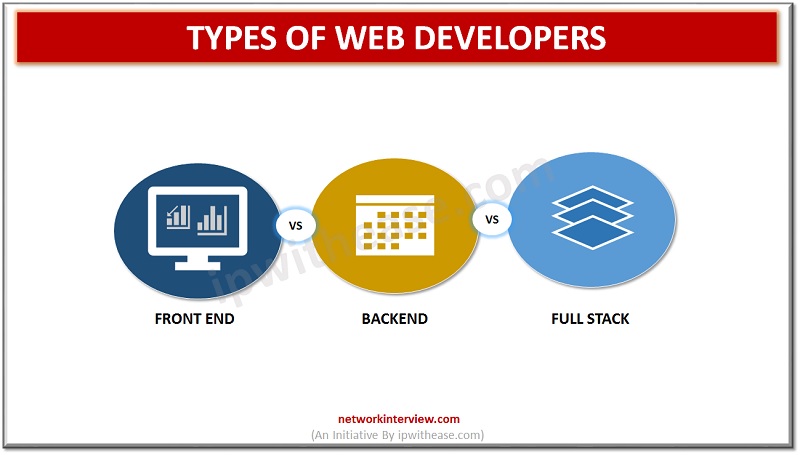 Web development work comprises skilled personnel who work on developing a website for the Internet or an Intranet (Company website). Web development may involve a simple single static page development in HTML to complex web applications such as e-commerce sites, social networking services , client and server-side scripting, network security configurations and so on.

In this article we will learn more about various types of web developers , their skill sets and what type of work is suitable for which developer and key differences between them.

Web developers are categorized into three types as under – Front end developer , Backend developer and Full Stack developer. Let’s understand the key difference among these.

Front end developers are responsible to ensure smooth functioning of a website from its visual appearance.  These developers convert UI (Under interface) look and feel into code. Front end developers usually use HTML , JavaScript , cascading style sheets. Every web developer initially learns web development using HTML language and it provides a basic framework for the website. JavaScript is most commonly used programming languages nowadays , it is a high medium, multi-paradigm and just in time compiled language.

Backend Developer is responsible for server-side functionality of an application. The user interacts with the website UI which is developed by the front end developer. They are least concerned about how sign in works, how we place an order, how payment functionality works etc.

Full Stack developer manages both client and server side. They are also referred to as “Jack of all Trades” . They are skilled with multiple frameworks of front-end development and experienced in all web development layers from managing databases to solving missing critical requirements. They have experience and exposure to business logic and user experiences. They act as consultants and provide guidance.

Below table summarizes the differences between the three types:

What is Akamai NetSession Client?

What is Zentyal Linux Server?