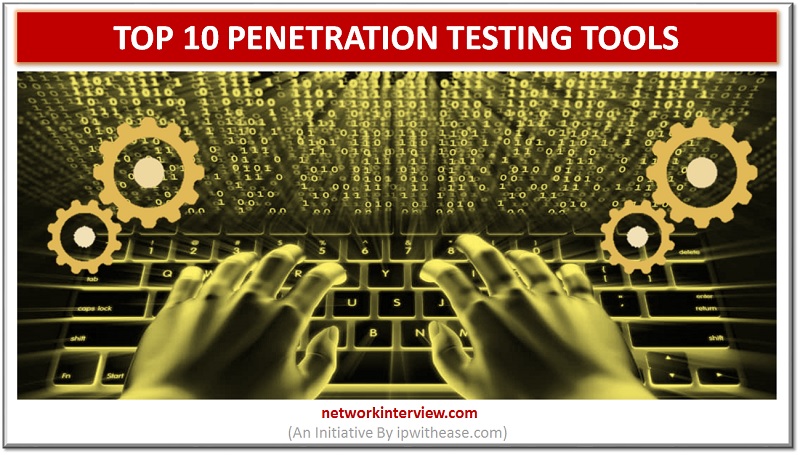 Identifying weaker controls in systems via attack simulation help organizations to gather information about the different ways hackers can gain unauthorised access of systems and sensitive data and information or may get engaged in some other kind of malicious activities such as data stealing, data destruction, ransom demands etc.

There are many different types of penetration testing tools are available in the market. Today we will explore more about them and understand their usage and benefits.

Netsparker is one of the most popular security scanners for web applications. It can identify attacks ranging from Cross scripting to SQL injection and can be used by developers on websites, web services and web applications. It can scan 500 to 1000 web programs at the same time and can be used to customize security scan with attack preferences such as authentication, URL rewrite rules. Exploitation proof is documented.

It  is also known as Ethereal 0.2.0 and analyses network with 600 authors. Network packets can be captured quickly and easily intercepted. This is an open source software and available on variety of systems such as Windows, Linux, Sun Solaris, FreeBSD etc. It supports online / offline analysis, colouring rules can be added for performing intuitive analysis.

It is the most widely used testing automation framework in the world. An open source software and allows network adminstrator to break in and identify weak points. It is easier to use GUI based interface and command line both, it can collect test data for 1500 exploits, Network segmentation tests are performed using MetaModules, supported platforms are Mac OS X, Windows, and Linux.

BeEF stands for ‘Browser Exploitation Framework’. This tool is meant to check web browser, it is best suited for mobile users as it is adapted to combat web borne attacks and uses GitHub to identify issues. It explorers weaknesses way beyond client and network perimeter. It is used for client-side attack vectors and connects with more than one web browsers.

Passwords are the entry gates to systems and attackers use passwords to steal credentials and gain access to sensitive systems. It is an open source software. It identifies many types of passwords hashes, discovers password databases weaknesses, it has customized cracker, it allows users to explore online documentation which includes summary of changes between different versions.

It is used to test wireless connections by capturing data packets and exporting it into a text file. This tool is supported on many flavours of operating systems such as Linux, Windows, FreeBSD, OpenBSD, Sun Solaris etc. and support for WEP directory attacks. On capturing the WPA handshake suite uses password dictionary and statistical techniques for break in into WEP.  It offers testing by creating fake access points for various areas of security such as attacking, monitoring, testing, and cracking.

It is an automated testing tool which is capable of auditing complicated management reports and handles issues in compliance. It handles a wide range of network vulnerabilities (including out of band vulnerabilities) also. It covers about 4500 weaknesses including cross scripting, SQL injection , XSS etc., it has built in black and white box testing, it can run locally thru a cloud solution.

There are two versions of the Burp suite for developers. The free version provides tools for scanning activities. For advanced penetration capabilities one can use second version. This tool is meant for checking web-based applications and can map the attack surface to analyse traffic between browser and destination servers. It uses web penetration testing on Java platform, and it is capable to perform automatic crawling on web-based applications, and available on Windows, Linux, OS X etc.

This tool is designed to handle Man in the middle attacks. This software can send invalid frames and build packets to perform specific tasks. This tool is best suited for deep packet sniffing, monitoring, and testing LAN, it supports active /passive dissection of protections, content filtering capabilities, can perform both host and network analysis.

It is a web-based application attack and audit framework focused on identifying and exploiting vulnerabilities in web applications. Attack, audit, and discovery are three types of Plugins supported, it can configure to run as MITM proxy, it can handle raw HTTP requests and automated HTTP request generation.

One solution that deserves mention is the ManageEngine Netflow Analyzer. This particular tool can analyze real time network traffic with graphs, using NetFlow, sFlow, IPFIX, Netstream, J-Flow, and  also provides metrics of the network bandwidth for different users, devices or applications and helps to allocate resources. You may download a free trial of ManageEngine Netflow Analyzer Now!

Some of the key features of Penetration Testing Tools can be summarized as below:

What is Packet Capture?

WEP vs TKIP vs CCMP

Career in Cyber Security or Cloud Computing: Which is better?