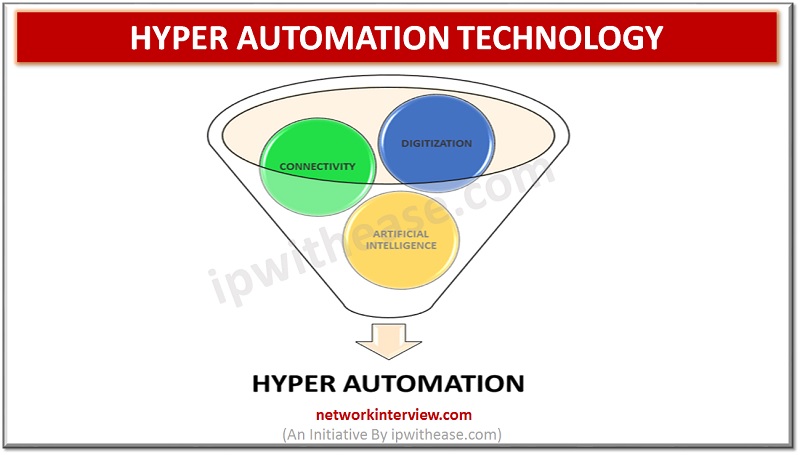 If we were speaking a decade back and one of us comes up with an idea of amalgamating machine learning and artificial intelligence to attain perfection in conventional automation industry, then most of us would have laughed at it as a part of routine joke! Can anyone seriously realize automation without direct human intervention? Well yes, things are on the verge of transforming forever with the advent of hyper automation technology.

The concept of hyper-automation brings onto the table the application of superior technologies like artificial intelligence and machine learning. Unlike the automation capabilities where the human touch is inevitable at one or more checkpoints, the entire framework is going to be self-driven with humans guiding and supervising things. It is going to learn from practice and improve with experience without getting explicitly programmed externally.

Here, we will try to have a glimpse of a few components of this ultra-revolutionary technology and how it is going to impact the destiny of humankind in the future. During this course of journey, we also break a few myths associated with this futuristic technology.

It is something beyond Automation of Tasks

There are people who believe that hyperautomation is only about replicating all tasks with robotic precision process. They cannot be more wrong! It is not about 100% machine employability or to sideline humans from the production chain. One of the chief attributes of hyperautomation is its quality to loop humans within the process.

The objective of introducing hyperautomation technology in business is to make a better use of collaborative intelligence. The technology is going to kick start an era of mankind where humans and technology are not going to operate side by side, but rather together. It is the employees that are going to train the automation tools and undergoing multiple levels of machine learning, reach down to a state where AI-enabled decision making can happen for real.

It is an undeniable fact that there is a huge difference among integrating and integrating well. It is critical for hyperautomation tools to easily fit into the existing tech stack of the companies. The IT division must have a platform that can easily plug and play a wide range of other tools to achieve the best of hyperautomation.

All the automation tools appearing and functioning on a single platform ought to deliver seamless interoperability. The platform has to be proficient to assemble best-of-breed tools right under one roof. It will reduce the stake of risky investment from the company’s end and make the maximum use of the available inventory to perform seamlessly under a common assembly line.

The Benefits Waiting Ahead of the Curve

The benefits of hyperautomation technology can take the automation industry light years ahead.

The hyperautomation technology based jobs are not today’s headline but the reality of future. It is going to save time and resources for the company, repetitive manual labour for the human workforce and provide machine learning technology a platform to learn under a natural human brain. Once it becomes a success in automation industry, we can expand the horizon to think about more sectors where AI based robotics can help the mankind as a valuable workforce.

Difference between Agile and Devops