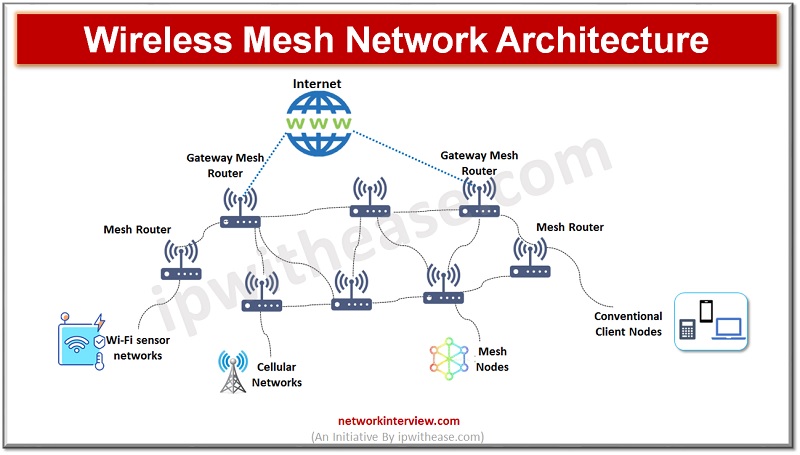 The requirements which demand less mobility and low cost within a radio range are ideal for people connected with the Internet who work in remote areas and operating businesses. These are: self-healing nature and integration with various different networks which include cellular networks and IEEE 802.11, 802.16 also and flexible to work with more than one protocol.

Today we look more in detail about wireless mesh topology, how it works and its architecture, its features and advantages inclusive of its use cases etc.

Wireless networks may or may not be connected to the Internet. The network topology of wireless mesh networks could be full or partial mesh. A full mesh means every node will communicate to every other node in the network. In partial mesh nodes only communicate to their nearby nodes.

When data is transmitted between two nodes, they do not communicate with each other, data hopping happens from one node to the next node until it reaches its final destination. The nodes are programmed to use adaptive routing algorithms to constantly determine the optimal route between nodes for transmission of data.

Wireless Mesh technology is an infrastructure which is a network of routers without the cabling between the nodes. It consists of radio nodes which need not be wired to a cabled port unlike conventional wireless access points. Nodes between the source and destination act as forwarding nodes, shortest hops are predicted to transmit the data to a large distance. Wireless mesh topology is reliable.

Wireless mesh networks are segregated into three types based on nodes functionality in the network as under:

Mesh Architecture based on Clients:

Mesh architecture based on client having peer to peer connectivity. Each node acts as a routing node for data transfer. Client performs the role of mesh routing by acting in the forwarding of data packets.

Mesh nodes/routers act as backbone for the entire network operation. Using a network mesh router, it performs routing and forwarding of data packets  to the destination.