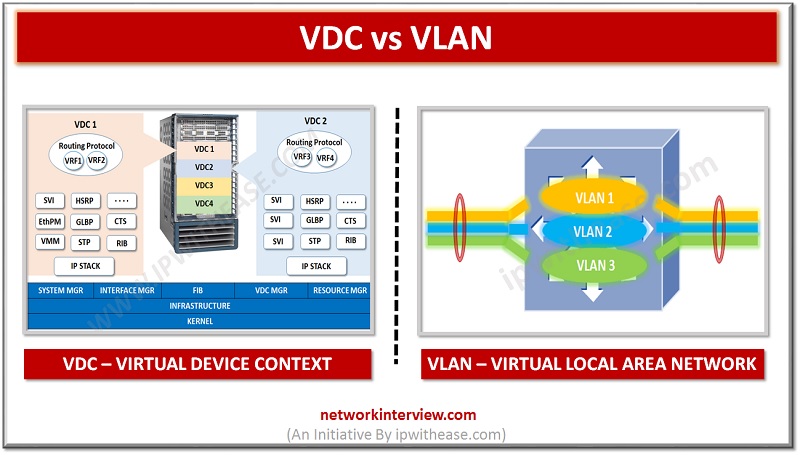 Virtualization in IT systems has helped Network estate immensely. 2 technologies which have helped networking across various segments are VLAN and VDC. While VLAN is short for Virtual Local Area Network, VDC means Virtual device contexts. VLAN divides the network into separate logical areas at the Layer 2 level and each VLAN is considered an individual broadcast domain. VDCs allows the switches to virtualize physical chassis.

In VLAN, unicast, broadcast and multicast packets are forwarded and flooded only to end stations in that VLAN. VLAN is considered a logical network and packets destined for stations that do not belong to the same VLAN (different subnet) must be forwarded through a router or Layer 3 device or entity.

VDC, presents itself as a unique device to connected users within the framework of that physical switch. VDC behaves as a separate logical entity within the switch, maintaining its own unique set of running software processes/configuration.

Resource that can be shared in VDC –

Resource that cannot be shared in VDC –

To Create VDC, an advance license is required on Nexus switch. License is associated with serial number of chassis. Cisco provide 120 days grace period for trial.

Default VDC – VDC1 is said to be default. It is used for management of all VDC in Nexus. At first login in nexus switch user will be in default VDC. Default VDC is created by NX-OS boot up. In Default VDC, we can create/update/delete other non-default VDCs and allocate resources such as interface, memory to non-default VDC.

Admin VDC – It is created from initial configuration wizard. No resources is allocated to Admin VDC since it is not made to handle user data traffic. It is used for managing other VDCs and nexus chassis.  Default VDC has been replaced with Admin VDC in SUP2/SUP2E with NX-OS 6.1. Default and Admin VDC cannot exist at the same time. VDC 1 can be either configured as default or Admin. We can convert to admin VDC by using this command #System admin VDC.

Non-Default VDC – It can be created from Admin or Default VDC. Changes made on non-default VDC does not affect other VDCs. Each VDC have its own configuration file. Non-default VDC is used to handle user data traffic as interfaces can be allocated to it.

Storage VDC, It is used when SAN function is implemented in Nexus. Two different types of interfaces are assigned ie FCOE and shared interface.

Hostname(config-vdc)#allocate interface ethernet slot/port > Allocates one interface to the VDC.

Virtual LAN (VLAN), divides the network logically on layer 2 (data link layer). VLANs also divide broadcast domain. It allows hosts to be grouped in a same broadcast domain even if they are not connected to the same switch. Two types of VLAN membership methods are Static and Dynamic.

In a Static VLAN, VLAN is manually created and then VLAN is assigned to respective switch ports. It is also called port-based VLAN. The port association with the VLAN does not change until the administrator changes the port assignment. End user device becomes the member of VLAN based on the physical switch port to which they are connected.

In a Dynamic VLAN, when a port is configured as dynamic, it receives VLAN information from VMPS server based on the MAC address. It reduces overhead of network administrator. When a workstation is connected to a switch port the switch queries a database to establish VLAN membership. VLAN database of a VLAN Membership Policy Server (VMPS) server is updated by administrator.

Both VDCs and VLANs are an integral part of a LAN network, and IT solutions would be incomplete without using atleast one of them. Virtualization is used by both discussed concepts where VDC came to fore pretty recently, VLAN has been there for quite long. VDC divides the physical chassis into multiple logical chassis, whereas VLAN divides physical switch network into logical parts. 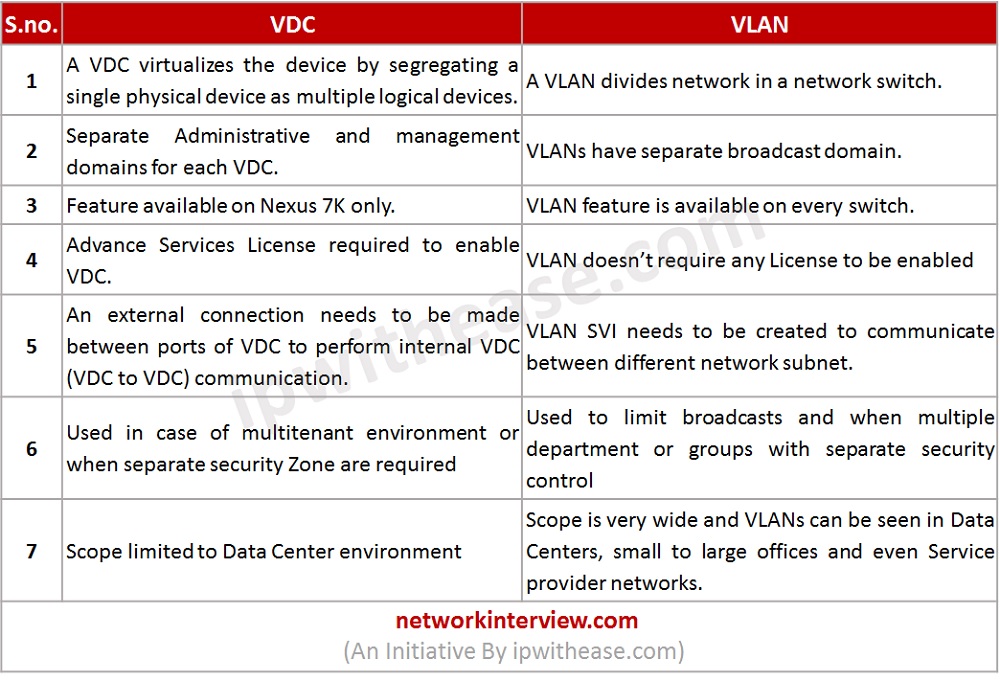 What is NETCONF protocol?