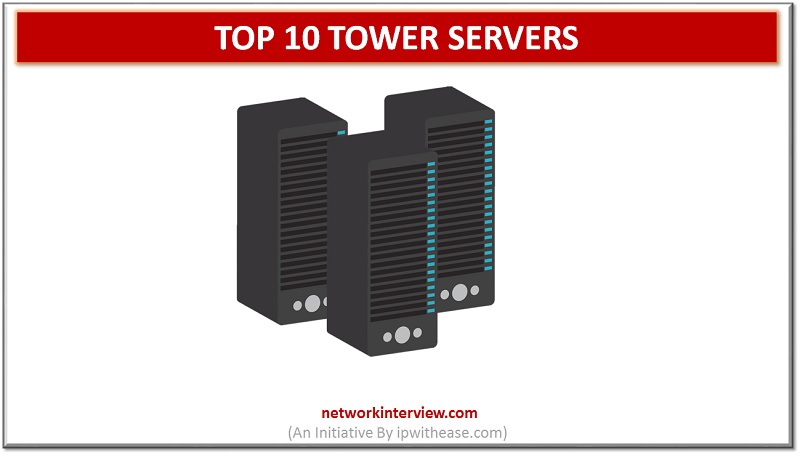 Tower servers are most prevalent in the small businesses today. They provide processing power for everything from serving files and databases to systems management and corporate networking. They are well suited for businesses looking for purchasing their first server as they are compact, low cost and have ease of setup. These small business servers are easy to setup and maintain, robust enough to be able to work under intense loads, handle high number of users, and also be expandable as business grows.

In this article we will look at some Tower servers which made their place in top 10 and shaped the IT and business landscape.  Understand their strength and features.

It can be brought as bare bone or a fully configured server. It has Intel Xeon E3-1225 v5, supports six SATA disks, 64 GB memory. It has fast quad – core Xeon processor and can accommodate six internal disks. However, it has few limitations single Gigabit network port, no hot swapping of disks.

It has bare bone version without hard disks. It has Haswell-based Pentium processor which has clock speed of 3GBz and supports up to 32 GB DDR3 ECC RAM, expansion capabilities include four SATA ports (32 TB if use 8 TB hard disks), four I/O slots and 10 USB ports. It is cost effective model and compact mini tower Dell Server having easy access to internals. It has certain limitations such as it is more of a desktop than server CPU and it has no drives or OS.

It has built on best of ThinkServer tradition. It is 4U enterprise class server and it comes with support for RAID 0,1,10 and 5 via an onboard controller. It can accommodate up to four 3.5” HDDs and it can go up to 40 TB of storage. It has 64 GB of memory. It is most affordable ThinkServer model and quite in operations.

It is packed with Intel Xeon scalable processors, and offers big performance boost over earlier models. It requires separate storage however but supports wide support for graphics and computing options. it can be turned into rack server as business grows without additional investment. It supports up to 16 GB memory and scalable and decent in design. Limitations are it is a hefty machine and don’t come with hard disks.

It is an entry level, SMB focused server. It is designed to run silently 24/7 and has RAID 0/1/10 but not 5. This model has Intel Xeon E3-1226 V3, two 1 TB hard disks and 16 GB memory. It comes with optical drive and two Gigabit Ethernet ports for redundancy, four DIMM slots and four storage bays, this server supports up to 32 TB of storage and 32 GB of memory. It has some plus features such as good guarantee and has an optical drive. Some limitations are no RAID 5

It is small in size and light weight. It has Intel Xeon E3 family, up to 16 GB memory, system management processor, two Gigabit Ethernet ports, one PCIe slot, support for RAID 0/1/10, a DVD writer, up to four hard disks, an internal MicroSD card slot, integrated Matrox G200 graphics chip and seven USB ports. It is professional built with ease of access and compact in size. It has no hot swap disks and quieter in operation.

It is a big server with 50 Litre volume and 25Kg weight, this is 5 U server runs on Intel Xeon E3 model with Turbo Boost technology with three years onsite warranty. Supports up to 64 GB of memory, and integrated RAID controller with four RAID types, DVD writer, four fans, a 300W PSU and two Gigabit Ethernet ports. Up to eight hard drives and eight USB ports, lockable door and support for ECC memory, Serial and VGA connector. Limitations are costly and a big machine.

Below table summarizes the comparison between all these products: