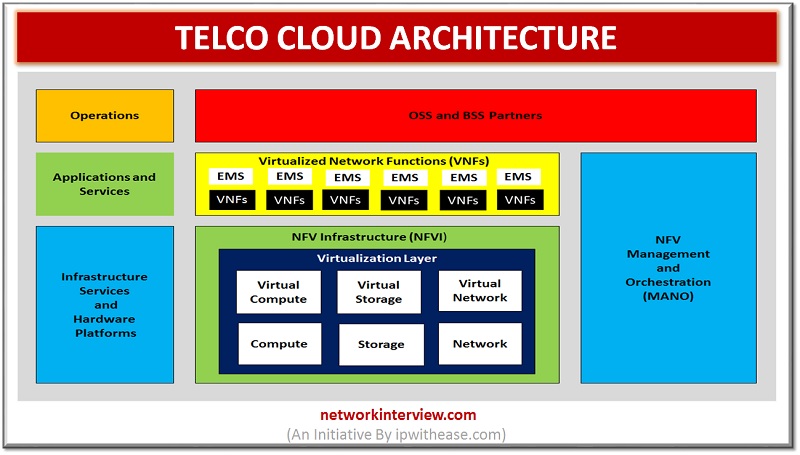 Telco cloud represents the Data Center resources which are required to deploy and manage a mobile phone network. Telco clouds are based in private Data Center facilities which are used to manage the telecommunication requirements of 3G/4G and LTE networks. With the current roll-out of 5G equipment across the mobile service provider, vendors have adopted strategies related to network function virtualization (NFV) and software-defined data center (SDDC) management which have become indispensable part of a telco setup.

Related – Telco Cloud vs IT Cloud

Network functions virtualization (NFV) is a way to virtualize network services, such as routers, firewalls, and load balancers, that have traditionally been run on proprietary hardware or dedicated hardware. NFV’s functions like routing, load balancing and firewalls are packaged as virtual machines (VMs). NFV doesn’t depend on dedicated hardware for each network function. NFV improves scalability and agility by allowing service providers to deliver new network services and applications on demand, without requiring additional hardware resource.

The NFV architecture was proposed by the European Telecommunications Standards Institute (ETSI) which has helped to define standards for NFV implementation. Each component of the architecture is based on these standards with approach to promote better stability and interoperability. NFV architecture consists of:

Element Management System (EMS) has capability for the functional management of VNF. It includes –

Depending on infrastructure, there can be provision of one EMS per VNF or else one EMS that can manage multiple VNFs. EMS can be deployed as Virtual Network Function (VNF).

Management, Automation and Network Orchestration (MANO) is responsible for managing NFV infrastructure and provisioning new VNFs. Management and Orchestration Layer is also abbreviated as MANO. Three components of this layer:

MANO interacts with both NFVI and VNF layer. It manages all the resources in the infrastructure layer, and also creates and deletes resources and manages their allocation of the VNFs.

Telco Cloud refers to a Private Cloud within a Telco/ISP environment. VNF functions are an imperative part of Telco Cloud and not extensively employed in enterprise Cloud or IT Cloud.

Telco Cloud vs IT Cloud