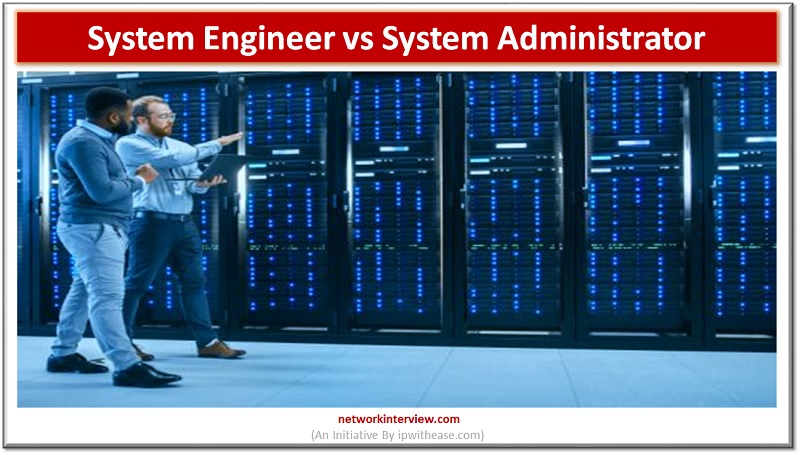 The rapid development and need for software Engineers created various terminology among the job seekers and recruiters. And one of the debatable terms is System Engineer and System Administrator.

Are you a newbie to this area, wondering what is the difference between the System Engineer and System Administrator? Want to know which one suits you best?

Then you are in the right place. Here in this article, you will get a basic understanding of these two roles and their respected responsibilities. Okay without further ado, let’s dive into the article.

Well, the truth to be told, there is no definite explanation for these two roles. The roles and responsibilities of the System Engineer and System Administrator vary from one company to another. But here is a rough and general description of these roles –

What is a System Engineer?

System Engineering is the branch of Engineering, which deals with the creation and designing, development, technical management of the different types of systems or computers. And a system engineer is a person who coordinates different teams, and experts to develop an efficient system to obtain the target or best output.

They play an important role in this multi-dimensional computer world and often work together with the project manager. He/She is involved in each development phase of the systems and a system engineer will have a deep understanding of modern Systems, networking.

Roles & Responsibilities of a System Engineer

Here are some major duties and roles of the System Engineer:

What is a System Administrator?

They manage the system security, operation time and make sure it needs matches with the existing budget. To become a system administrator, you should have a bachelor’s degree related to IT or Software Engineering. And you should keep on developing your technical skills.

Roles & Responsibilities of a System Administrator

Here are the roles and responsibilities of a System Administrator-

Alright by now, you should have got the basic idea about the System Engineer and System Administrator, now let’s see the difference between them.

In short, a system engineer is a creator, and a system administrator is a manager. Both technical positions involve a close relationship and in small organizations, a single person does both jobs.

If you have any further questions or thoughts please leave them in the comment section below.

What is Google DNS?