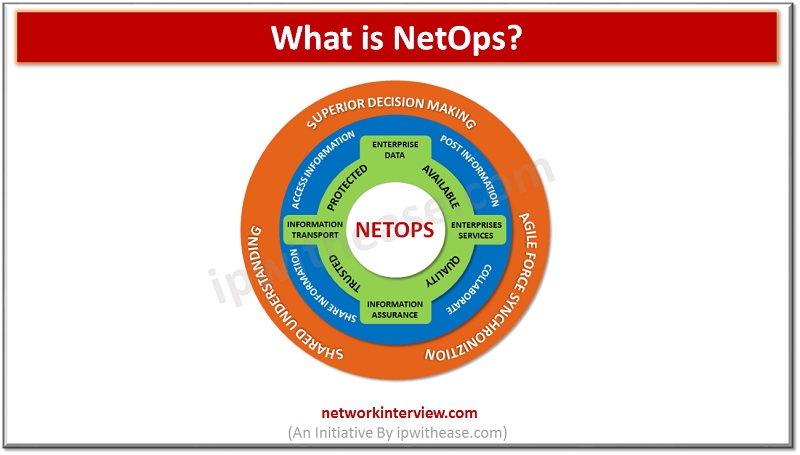 Today’s wide world industries have been introducing new acronyms to our dictionary. And it is really hard to know the meaning of them as different industries and sectors define them in their way. The tremendous advancement in the IT and Networking field creates a new acronym NetOps.

NetOps is expanded as Network Operations. The slow network leads to various difficulties and various recent IT advancements are focused on increasing the speed.  All these factors created NetOps by following the popular trend of combining the words with operations.

Though it seems simple it covers and relates to the DevOps, automation, agile software development, and other operations involved in running communications networks. It is an operational framework or approach followed by the IT Professionals to create agile, scalable, and efficient solutions or programs.

In short, NetOps refers to the implementation of some DevOps and other network techniques to satisfy business needs and goals.  NetOps is often used as synonymous with NetOps 1.0 and NetOps 2.0. Here is a further explanation about it.

It is the historical approach where the network teams used the Command Line Interface (CLI) to manage, deploy the infrastructure. It leads to the large use of hardware, troubleshooting, and installation of new devices as needed. In this approach, the network, data, and security teams work separately. The traditional approach is characterized as CLI based, It-driven, and automation adverse.

Soon the world business and organization started moving digital the existing network servers were overused. But the organization without considering the long-term solution just added more servers. And the traditional approach was the best till the advancement in the DevOps tools and increasing security needs.

NetOps 2.0 inspired form DevOps and incorporated some of its core values like automation, orchestration, agility. . Here the DevOps and SecOps team are given some rights to control and alter Network operations, and this makes them independent of the network engineers.

Unlike the traditional approach, it considers the overall business goals and works side by side with the Development Operations team and Security Operation teams

It advocates the modernization of the technologies by replacing the past hardware-based operation with software-defined networking, network virtualization. It adopts Artificial intelligence and machine learning practices to make the network operations intuitive, context-aware, and analytics oriented to help the organization to make decisions.

In short, NetOps 2.0 ensure fast application delivery with a secure and user-friendly network infrastructure that aligns with the enterprise’s goals.

Core themes and Value of NetOps 2.0

The world faced many security breaches in the rapid technical development and many organizations went down due to it. And thus the core value of NetOps is to minimize the vulnerability in the application service infrastructure. As the NetOps team work closely with the SecOps team it is possible to create a breach-proof Network application

The modern approach of NetOps makes the whole process digital and virtual and software-defined. It helps in easy management and increases the flexibility and agility of the organization.

In today’s data-driven, data analysis is very important to predict, plan, manipulate, and optimize the process. The virtualization of network data analysis helps to detect the problems before they occur. And it helps the management in the formulation of a plan and decision-making process.

In order, the prime goal of agile and speed network process the NetOps endorses the automation and machine learning. This makes the process error-prone and fast. The repeated and predicted tasks are made into automation.  And the experts studying the various areas where AI can implement to make the end-to-end process automated.

Benefits of NetOps in Business

The recent survey shows that nearly 40% of the world major business has agreed with the Network Operating Centers to manage their Network Operations.

Quintessential Things to do After Buying a New iPhone