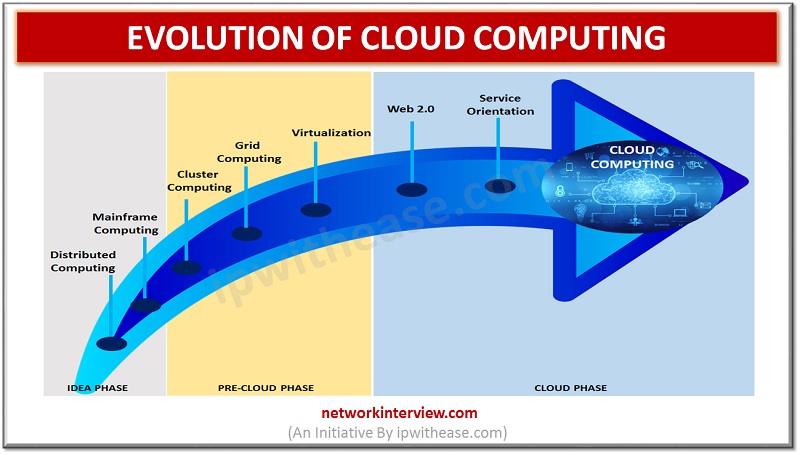 Introduction to Evolution of Cloud Computing

Cloud computing is playing an important role in everyone’s life. We cannot imagine a world without Cloud Computing techniques to handle Big Data. But we didn’t reach this level in few years.

The evolution of Cloud Computing can be traced back to the 1950s. Are you surprised? Today in this article, you will witness the development the cloud computing in three different phases.

The 3 Phases: Evolution of Cloud Computing

The idea Phase can consist of the technical development before the pre-internet era. Let’s see how it all started.

Distributed computing is where multiple independent systems are connected so that they seem to be a single entry to the users. It has the basic quality of cloud computing like scalability, concurrency, continuous availability, etc… However, the main problem is the need for the same Geographical location for all the computers.

And this led to the next marvelous invention Cluster computing. However, till today Mainframe helps use in various online transactions and research data processing.

This phase can be also called the Internet Phase. As in the 1960s, APRANET created the internet by connecting the four systems in different Geographical locations in America Like this Internet era started and so the new future of Cloud Technologies.

Here each computer is connected through a network of high bandwidth. Thus the cost involved in the Mainframe is removed and it became the best alternative for it. Though the problem of the cost was solved, the geographical restrictions still prevailed as the internet was in the starting stage.

In the 1990s the Grid Computing technologies came into action. Here the different systems are located in different locations of the world and connected through the internet. And each system was owned by different organizations. It solved the main problem of Distance but new problems emerged.

For example, as the distance between the nodes increased it needed high bandwidth but that was not possible in all cases. However, Grid Computing laid a strong foundation for today’s Cloud Computing. And many people call Cloud computing the Successor of Grid computing.

It refers to the techniques of distinguishing hardware into different visual layers. This allows the users to run multiple instances simultaneously in the hardware. This was introduced 40 years back, which is now the major idea used by major cloud computing providers like Amazon, Google, etc…

After the integration of Grid Computing with Virtualization techniques we needed only better hardware resources and the internet. They were made available in the meantime thus we started Cloud developments.

It plays an important role in Cloud Computing. Popular innovations in Web 2.0 like Google Maps, Twitter, Facebook, and other social media needed high storage. And this leads to the development of cloud storage techniques. And it created a new study called client-server management.

The next thing is the introduction of SaaS. As many people started using personal computers and smartphones the scale of technologies and user scale rapidly increased in the 2000s. And this created a new business opportunity called Software as a Service shortly called SaaS.

Then many SaaS companies started to provide cloud storage, infrastructure, and management service. It is termed utility computing. And then, today’s Cloud computing was brought into action. There are many types of cloud-like hybrid and simple models etc…

No matter what we have just started. And there is a big future for Cloud computing with the introduction of machine learning and AI technologies. It is very hard to predict how this cloud computing is going to change the future.

The introduction of 5G or the Internet of Things (IoT) can take evolution of cloud computing to the next level. However, we can hope to reap good benefits in the future.