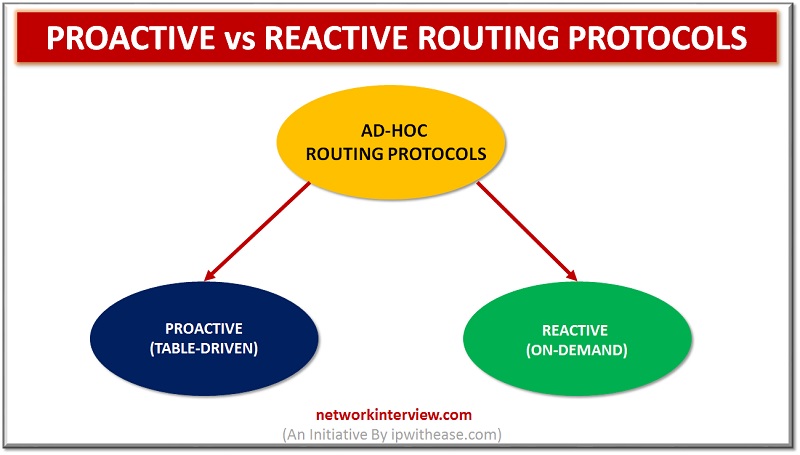 Routing protocols are the routes that help to learn dynamic routes. These protocols are organized on routers in regards with exchanging the information related with routing. Using the routing protocols in your network has many benefits like router has the ability to advertise the failing of router. Also you did not need to configure manually every route in each router in the network.

Further these routing protocols can be categorized in six various forms but we are going to talk about only two of them – reactive and proactive protocols. These both protocols are utilized in mobile Ad hoc networks for sending data to the destination from the host. This information is sent through multiple ways from source to destination that are mobile and can be located on car, bus, ship or aeroplane.

Generally, this type of network is utilized in a military field, a disaster hit area or on in area where infrastructure is demolished or does not exist. The network’s node work as the routers and transmit data from one node to another until it reaches the destination. As the data has to covered the various nodes so the routing protocol in important to deliver the data at correct location.

Reactive protocol is divides in two types – Ad hoc On-Demand Distance Vector (AODV) and Temporary Ordering Routing Algorithms (TORA). In AODV routing protocol, the work of node is independent and does not carry the information of other nodes or adjacent node in the network. The process only when the data is transferred to them to maintain the route with the destination. These nodes comprise of the information of the route from which the data has to be transferred so the passing of information packet is followed by predetermined route. TORA is a very adaptive and efficient process as it works with all the shortest possible routes from source to destination. In this type of protocol, each and every node carries the information of its neighbouring nodes. It also has the ability to ensure the journey of the data, creation of route and erase the route if there is any partition within the network.

Destination Sequence Vector or DSDV router is utilized in this type of protocol that was designed with the algorithm of Bellmann-Ford. All the information regarding with next node is maintained in this protocol. All the nodes that are mobile have to relay its entries with the adjacent nodes. The nodes that lies in the route deliver the data packet from one node to another after the mutual agreement. So, for this purpose all the nodes have to constantly update their position in DSDV protocol to avoid the interruption in the route.