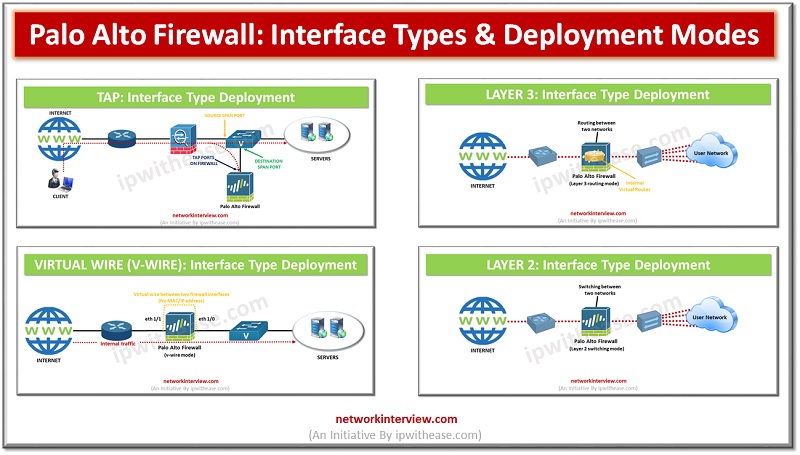 The entry and exit point of traffic in a firewall is enabled by the interface configurations of data ports. Palo Alto being a next-generation firewall, can operate in multiple deployments simultaneously as the deployments occur at the interface level and you can configure interfaces to support different deployments.

The firewall provides configuration options for both physical/Ethernet interfaces and logical interfaces.

In this article, we will discuss the major interface types in detail.

TAP Mode interface type uses mirroring or SPAN feature that allows passive monitoring of the traffic flow across a network. It involves configuration of SPAN in which the tap port on Palo Alto firewall connects to the destination SPAN port of the switch.

As the traffic is not running through the Palo Alto firewall, so it cannot block any threats to the traffic. The traffic can be monitored and cannot be controlled.

As the name implies, it’s a virtual interface in which a firewall is installed transparently on a network segment by binding two interfaces/ firewall ports. V-wire deployment mode simplifies the installation and configuration as the firewall can be inserted into an existing network. You need not to do any network redesigning or reconfiguration of the adjacent network devices. No MAC or IP addresses need to be assigned to the interfaces.

The virtual wire interfaces have no Layer 2 or Layer 3 addresses as it is directly connected to a Layer 2/Layer 3 networking device/host.

It does not support switching, VPN tunnels, or routing as no IP address is assigned to Layer 2 or Layer 3 devices.

In this type of interface, the firewall is configured to perform switching between two or more network segments. The traffic can be examined as per the policies which provides increased security and visibility within the internal network.

The firewall interfaces do not participate in the Spanning tree topology but they are capable of supporting the access/trunk links. Any bridge protocol data units (BPDU) received are directly transferred to the neighbouring Layer 2 switch without processing.

Layer 2 interface is to be configured when switching is required.

The traffic can be examined, monitored and controlled.